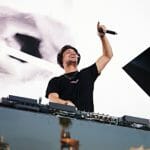 Two of STMPD RCRDS‘ most reputable stalwarts have finally come together for a completely unexpected, yet more than welcomed house mergence. Both Julian Jordan and WILL K have remained bulletproof as of late, standing behind some of the Dutch label’s presiding releases that include “Let Me Be The One” and “No Time“—now, they’re setting out to lock one down under the same banner with “The Box.”

Julian Jordan prefaced the arrival of “The Box” by cautioning that “this is going to ruin some healthy relationships with neighbours.” Don’t say you weren’t warned, because unfortunately for unsuspecting neighbors everywhere, Jordan was spot-on. Since an authorized club resurgence is still a little ways off, but hopefully not too far away, Jordan and WILL K decided to take matters into their own hands, wanting to take a crack at a sound that something either had yet to do. “The Box” results in a certifiably symmetrical split between the duo, with both respective recipes of house being held out in plain sight, rendering a torrid half-and-half of earsplitting vocal chops and thunderous basslines.

The post Julian Jordan, WILL K open up ‘The Box’ on Martin Garrix’s STMPD RCRDS appeared first on Dancing Astronaut.