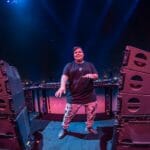 Breaking his short-lived original intermission following “When We’re Gone” with Mesto, Justin Mylo has made the return home to STMPD RCRDS with an ID that’s been in his back pocket for the past few months. Last December, Mylo chose a new outlet when it came to premiering new music, considering he’d been unable to do so in person. The need to adapt amid uncompromising COVID-19 restrictions on live premiering capabilities prompted Mylo to post an unfinished demo on his Instagram account, where he left its fate up to his more than 100,000 followers. After a swarm of calls to complete it flooded the post, he decided to do just that, bringing in the vocal backing of UK songwriting duo STRNGRS for the fully realized version of “I Remember.”

“I Remember” sees Mylo bring out his out-of-sight method of gratifying future house and serving as a paramount package of uninterrupted nostalgia that nods back to a much better period of time. On top of a memories-laden music video that sifts through some of Dutchman’s most cherished performances over the years, Justin Mylo shared the story behind the STMPD RCRDS single, explaining,

“I did the production for ‘I Remember’ a while ago and kinda forgot about the song. But when I ran into a demo version of it again I decided to post this on my IG feed and the response by the fans was so so crazy that I decided to team up with the guys of STRNGRS and we wrote this amazing high energy song which I can hopefully play live in the near future!”

The post Justin Mylo follows through on desired STMPD RCRDS ID with STRNGRS, ‘I Remember’ appeared first on Dancing Astronaut.