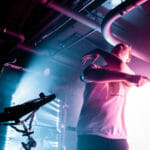 After formally reinstating his Cry / Dance series on Sirius XM Chill in November of 2020, Kasbo is reeling in the third installment in the ongoing initiative. The Places We Don’t Know producer dives headfirst into the empyreal dimensions of experimental, indie, nu-disco, and melodic house, with episode three interweaving originals from the likes of tourist, Icarus, Flume, Four Tet, SG Lewis, Lane 8, Hayden James, and many more.

The hour-long mix roves across a diverse selection of eclectic formats spanning hidden experimental gems, mashups, and notable melodic anthems such as Flume’s “Hyperreal,” SG Lewis’ “Hurting,” and Lane 8’s remix of “Ghost Voices.” The uplifting collection follows the Foreign Family Collective member’s second episode of the radio show, during which his seminal sophomore album, The Making of a Paracosm, was on full display.