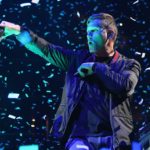 Kaskade has released his third consecutive single on Monstercat titled “Closer,” continuing his partnership with the label and video game, Rocket League. The single follows the veteran DJ’s previously released tracks “Flip Reset,” featuring WILL K and “Solid Ground,” both having landed as special featured soundtracks on Rocket League in December 2020. Building anticipation for his forthcoming Monstercat EP arriving in March, the Grammy-nominated producer stated of the release,

“Working on ‘Closer’ felt like coming home for me. There’s a lot to be said for the comfort of warm chords, vibey vocals and build ups that bring us all back to our love of bass. I want ‘Closer’ to be equally at home on the dance floor, the living room or in your headphones on repeat.”

Hear “Closer” by Kaskade below.