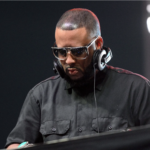 KAYTRANADA and Madlib are the foci of Driven by Sound, a new two-part documentary series spearheaded by Pitchfork that will offer viewers a chance to delve deep into the minds of the producers. Driven by Sound will specifically span in-depth conversations about their relationship to vinyl records and the impact that the musical medium has had on their respective careers.

The short docuseries will also feature a behind the scenes glimpse at the Lexus IS Wax Edition, a custom car complete with a fully operational in-car turntable. As an added bonus, Madlib and KAYTRANADA’s talents will converge on a seven-inch record accessible in Vinyl Me, Please subscribers’ April member shipments. Watch the first four minutes of the series here. Part two is due March 15.