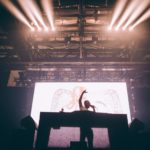 KAYTRANADA has remixed Busta Rhymes‘ release “The Don & The Boss” featuring Vybe Kartel as part of what has proven to be a very busy start to 2021 for the versatile producer.

The concise rework borrows from subtle, yet impactful elements while allowing the vocals to remain front and center. Spacey synths and clean percussions transform the original into a trademark KAYTRANADA production, worthy of repeat plays.

KAYTRANADA’s remix of “The Don & The Boss” follows original release “Caution” and recent documentary release Driven By Sound, where he is featured alongside Madlib.