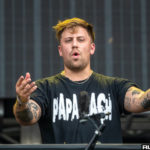 Reminiscent of early-2000’s emo, Smith’s screams during the drop amplify the track’s heavy sound. Beginning with synthetic guitar tones, Smith starts off with “It’s hard to say what your heart feels/When you say that it’s still not healed,” as a rising drumbeat joins him. “I’ll never let you down,” he repeats, the lyric continuing into the first drop. The energetic track highlights Kayzo’s skill while the second break incorporates Smith’s guttural screams and a bouncing beat. The one-off fades out as Smith continues to promise not to “let you down.”

The release follows Kayzo’s February collaboration with Black Tiger Sex Machine, “Lifeline.” In December 2020, he released “Tormenta” alongside Delta Heavy, and also managed to perform at Ultra Taiwan in November of the same year, a rare feat amid the pandemic.

The Word Alive released their most recent album, MONOMANIA, in February 2020. Ahead of the album, they shared the album’s title track and “BURNING YOUR WORLD DOWN.” They also released a cover of Incubus‘ “Pardon Me“

Tagged as Bass, Kayzo, music, Never Let You Down, TELLE.