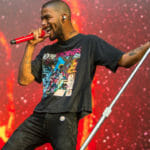 On December 10, Kid Cudi closed out the first day of Rolling Loud in Los Angeles, where the cosmic hip-hop superstar debuted an unreleased track dubbed “Freshie.” Cudi has been periodically hinting at the looming release of his eighth studio album, Entergalactic, since 2019. Not only did he confirm the LP’s long-awaited delivery onstage at Rolling Loud, but he also announced his plan to dispatch an additional album prior to Entergalactic’s release next summer. In front of a galvanized audience, The Man on the Moon shared,

“As you know, I have ‘Entergalactic’ coming in the summer. I wanna drop another album before that. I got some tasty surprises and I really am excited about all this new shit; this new music to give to you guys. That’s why I’m teasing this shit now, because it’s coming out soon.”

Rolling Loud attendees received special treatment that evening, as the creative visionary teased new music throughout his headlining set at the NOS Events Center in Southern California. Whereas many high-profile rap artists tend to denounce the use of cellphones at their shows, Cudi explicitly told his audience: “Tonight, record this shit.” Clearly, Cudi wants the world to know that 2022 will mark the return of Mr. Rager.

Just last month, Kid Cudi’s career-spanning documentary, “A Man Named Scott,” dropped on Amazon Prime. The film is a deep dive on Cudi’s mental health obstacles; it includes exclusive interviews with some of his closest friends in the entertainment industry and sheds critical light on today’s global fight to destigmatize conversations around mental health.