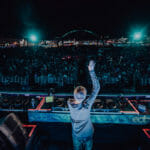 2021’s close came with KILL SCRIPT‘s classification as a Dancing Astronaut Artist to Watch in 2022. After a triplet of EPs and a deal with Armada Music in 2021 to boot, the emergent techno tastemaker was ripe for pickup on underground radars, and after surfacing on ours, KILL SCRIPT is tapping into 2022 with “Forever” alongside Crooked Bangs.

In the context of KILL SCRIPT’s catalog, “Forever” is a bit of an anomaly, what with its amalgamation of melody and techno drum work. Per the up-and-coming producer, it’s “the second glimpse into the melodic side of KILL SCRIPT. “After all the world building into the KILL SCRIPT universe and displaying the struggle, ‘Forever’ is a beacon of hope that everything will work itself out. I combined my love for progressive and love for melodic-techno and am very happy with how it came to be,” he said.

“Forever” can be expected to surface in KILL SCRIPT’s upcoming sets in Texas; on January 29, KILL SCRIPT can be found playing The Concourse Project in Austin, followed by Voltage in Dallas.