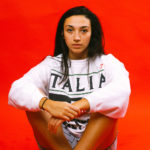 Minneapolis-based singer/songwriter/producer Kim Tee is a superstar in the making, and is kicking off 2021 with her second official solo release “Old T-Shirt” (FADER Label). Having previously worked with fellow Minneapolis artists such as Dizzy Fae and Dua Saleh—remixing the latter’s hit track “Albany”—and, most publicly, touring with Clairo as a guitarist, keyboard-player, and music director, Tee is building up an immense amount of buzz.