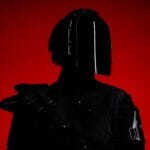 One of Dancing Astronaut’s Artists to Watch in 2021, KLOUD has returned to Lowly with a fierce track titled “LOVE ME” featuring Gabriel Paris. The single follows his recent remix of Apashe and Slumberjack‘s “Legend,” and is the first track from his forthcoming EP 1093, set to release in May.

“LOVE ME” takes a step forward in the masked producer’s dark and futuristic-themed production as electro, mid-tempo, and synth-wave meld for a thrilling dynamic of nostalgic 80’s synths and igniting vocals. Fans will relish in the single’s journey through timeless electronic sounds and modern production elements as KLOUD further sets himself apart from other creatives in the space with his inquisitive approach to artistic self-expression.