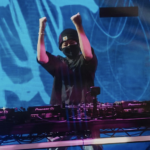 It’s not too late to hop on the Knock2 bandwagon. Every single time the San Diego phenom’s name turns up, it’s because he’s doing something to re-attest that he’s in clear command behind the reigns of both house and trap music’s on-deck generation. After issuing his sophomore knockthisoff EP and locking down a more-than-earned nod to Dancing Astronaut‘s Artists to Watch in 2021, Knock2 is stamping his release card for the first time in the new year with “dashstar*” on Night Mode.

If you’ve virtually experienced any of Knock2’s performances over the last calendar year, “dashstar*” has permanently remained on your ID radar and it could not be a more fitting opening number to his 2021. As Knock2 would put it best, “dashstar*” has absolutely no limit, typifying what proper bass house can be with its kinetic drive and directly invalidating a recent claim that no artist is keeping dance music interesting—because Knock2 certainly is.