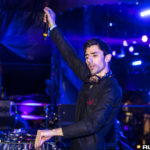 KSHMR launches the new year with his latest single titled, “The World We Left Behind” featuring KARRA, forthcoming from his debut album, Harmonica Andromeda, slated for March. The new track is the first release from his upcoming album and marks KSHMR’s first project since his 2017 EP, Materia. In a press release, the multi-genre producer and DJ states,

“The best song I’ve ever made, I tear up listening to KARRA’s chorus. The song embodies so much of what I love in music, youthful purity instead of adult bravado. It’s a bit Lion King, a bit Porter Robinson. I’m really excited for people to hear this and the rest of the album.”

“The World We Left Behind” personifies KSHMR’s latest sonic direction as the single stays keen to the producer’s signature sound while channeling a new set of grooves, characterized by an ensemble of euphoric synths, enchanting melodies, cinematic atmospheres, and alluring choruses.

The single previews the worldly production of his upcoming debut LP, enlisting the talents of Reid Stefan and frequent vocal collaborator KARRA, the latter of which has worked with the Dharma Worldwide label head on tracks such as “Devil Inside Me,” “Scare Me,” and “Anywhere You Wanna Go,” released by way of his recent Dreamz side project.

Listen to “The World We Left Behind” featuring KARRA below.