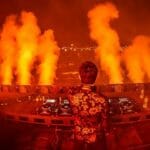 Following his anticipated 2021 album, KSHMR will be dropping Harmonica Andromeda Deluxe on June 11. The new release will feature five previously unreleased singles, including the now-available “You Don’t Need To Ask” with vocalist TZAR. The track is based around a slowed future house groove with a multitude of string samples underneath TZAR’s sultry performance, in a fluid encapsulation of KSHMR’s trademark sound.

“You Don’t Need To Ask” continues KSHMR’s relentless hot streak in 2021, most recently scored by his collaboration with Armaan Malik, and Eric Nam in support of Asian American Pacific Islander Heritage Month. Of course, the highlight of KSHMR’s year has been his sophomore album Harmonica Andromeda, which he infamously called the “most ambitious, maybe even one of the best electronic albums of all time…” Read more about the record and stream an exclusive KSHMR mix for Dancing Astronaut in his Saturday Night Session interview.