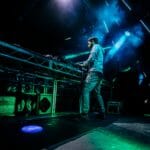 The man-made calendar isn’t commissioned with starting each of the four seasons—Lane 8 is, and Dancing Astronaut‘s 2020 Artist of the Year is locking in his first mixtape of 2021 and initiating the temperature’s skyward trend just four days ahead of its true cyclical onset. In tandem with Lane 8’s routine SoundCloud and YouTube mixtape uploads, the “Spring 2021 Mixtape” simultaneously arrives via Apple Music, in addition to all seasonal mixes dating back to 2018, for the first time in series history.

55 selections, including a monolithic 14 unnamed IDs, constitute the nearly three-and-a-half-hour “Spring 2021 Mixtape” glossary as the This Never Happened captain inducts the year’s sophomore quarter in the only manner that he knows how. Spanning his still-unreleased “Is This Our Earth?” from Anjunadeep 12 to Yotto’s newly minted spin of Faithless to a bundle of Sultan + Shepard‘s album cuts, Lane 8 outshines himself as per standard practice.

Stream Lane 8’s “Spring 2021 Mixtape” in its entirety below.