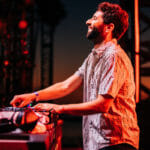 The single-day countdown until Reviver is on and with Lane 8’s fourth album now a near shot, he opted to give a fourth and final preview of what’s to come later this month. Just a week removed from his year-opening winter mixtape and handful of hours following his Coachella lineup placement, Lane 8 has recalled British singer-songwriter duo Solomon Grey to surrender “Automatic” as one of two looming crossovers on Reviver.

Identical to fellow Reviver contributor Arctic Lake, Solomon Grey have crossed paths with Lane 8 a couple of times before—on both “Hot As You Want” and “Diamonds“—and are set to back a pair of productions on the This Never Happened founder’s newest LP. “Automatic”—otherwise known as ID4 from Lane 8’s “Winter 2021 Mixtape”—diversifies the dancefloor-driven mindset of Reviver for a fourth successive time, stunningly complimenting Lane 8 and Solomon Grey’s respective production and lyrical synergy and joining “Nuclear Lethargy,” “What Have You Done To Me?” and the album’s title track to reaffirm the sheer excitement everyone has for January 21.