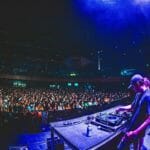 Last Heroes are doing what they do best—saving “New Music Friday” with a brand new release.

On March 19, Garrett Lucero and Brian Helander of the Ophelia Records-signed two-man show etched their first original of the new calendar year into the 2021 pillar alongside French singer-songwriting duo Lunis. The creative quartet’s collaborative interplay has translated to “Getaway,” a wistful and reflective follow-up to their January 29 remix of Gryffin and Audrey Mika‘s “Safe With Me.” Shimmering synths strike emotive chords in a bass-punctuated effort that emblematizes Ophelia’s sonic ethos: poignant electronic that awakens feeling with touches of euphoria and texture.

The post Last Heroes don their capes for a ‘Getaway’ alongside Lunis appeared first on Dancing Astronaut.