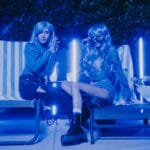 Lights and Elohim have teamed up for a glittering new track dubbed, “Real Thing.” With cascading instrumentals and floating vocals, the single finds the two searching for love, seeking the makings of a real, meaningful relationship. Soft tones and sweet melodies fill the track’s space, creating a peaceful element that offsets the tune’s hesitant lyrics. “But tell me, is the real thing/Even a real thing?” asks the song’s drifting hook.

The post Lights, Elohim link in search of the ‘Real Thing’ on new joint single appeared first on Dancing Astronaut.