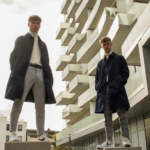 Rewind back to 2020’s terminal moments when DJ Snake and Malaa dropped into the Secret Room for their sophomore back-to-back stream, and the Parisian pair introduced an ID from a fellow French tandem, Lodgerz. Fast forward to present day, and that ID formally secured both a name and place as the brothers make their first markings on the year ahead with an arrival on STMPD RCRDS, “Like This.”

Not long after they officially solidified their family ties to form a musical duo, Lodgerz took complete advantage of the previous calendar while at home, and they’re now resetting that 13-part release sum with another balanced convergence of their patented tech house and bass house finesse. “Like This” is a praiseworthy doorway into Martin Garrix‘s label for the siblings, synchronizing Lodgerz’ forenamed touch with a high-pressure lead and abberant bassline that makes for one virtual club-primed original.

The post Lodgerz arrive on STMPD RCRDS with tech and bass house mixture, ‘Like This’ appeared first on Dancing Astronaut.