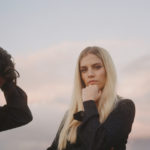 London Grammar have shared their latest single, “Lose Your Head,” from their anticipated third album, Californian Soil. “Lose Your Head” marks the outfit’s third release following the announcement of their new LP, originally set to arrive February 12. Californian Soil will be available April 9 via Ministry of Sound.

The English indie pop band resurfaced for the first time since their 2017 album, Truth Is A Beautiful Thing, sharing their song “Baby It’s You” in August 2020 before unveiling the album’s titular track “Californian Soil.” On the British trio’s most recent track, front-woman Hannah Reid said in a press release,

“‘Lose Your Head’ is about power and control in relationships, the lyrics are quite dark, but I wanted to show the song in an upbeat way.”

The George FitzGerald-produced track is accompanied by an ethereal music video directed by Zhang + Knight. The cinematic audiovisual delivers a transcendentally empowering ballad, intensified by synths, drums, violins, and horns, in a graceful juxtaposition of Reid’s lucid vocals.

Watch the official music video for London Grammar’s “Lose Your Head” below.