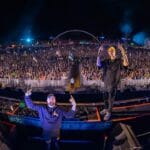 One revolution around the Sun after polishing their fifth EP, Lost Kings have made their way back towards It’s Not You to give it a second wind. “I Miss The Future” would go on to command the EP’s second half back in June—along with “Me Myself & Adderall” later that summer—although its eventual purpose wasn’t fully known up until this moment, with Lost Kings now not only lengthening their EP’s title but also its tracklist.

After a headlining fall run that included stops through 15 different cities and stints at both EDC Las Vegas and Lollapalooza, Lost Kings turned a classic breakup phrase into their EP’s full name. It’s Not You, It’s Me sees the Los Angeles tandem tack on a pair of heartsick-directed originals to the previously delivered six, continuing to perfect their matchless recipe of quality production and genuine, moving lyricism through a pair of awaited IDs, “PS I Love You” and “Broken In All The Right Places” with Mod Sun. Lost Kings spoke on the latter original and how it came to be, stating,

“‘Broken In All The Right Places’ is one of our favorite songs we’ve ever done. Mod Sun is an artist we’ve had on our short list for a long time and finally got the chance to work together. We actually reached out via twitter and sent him the idea and instantly he responded with ‘I can kill this.i So we set up a date and finished the record together. He embodies what we wanted the record to sound like so it was a perfect match when we got in the studio. This songs been a long time coming and we’re pumped to put it out into the world and finally get to play it live at our shows.”

The post Lost Kings send in a pair of touching originals to perfect ‘It’s Not You, It’s Me’ EP appeared first on Dancing Astronaut.