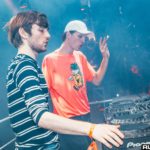 Louis The Child and genre-blending singer and songwriter BabyJake have released their new single “Somewhere Else,” via Interscope Records.

“Somewhere Else” finds both Louis The Child and BabyJake combing a variety of melodic landscapes as the track delves into subtle elements of drum ‘n’ bass, house, indie, and pop. The single, accompanied with a visual, candidly captures the song’s meaning about self-discovery and obtaining a more fulfilling life.

On the new single, the Chicago-duo said of the track,

“Life is full of ups and downs, moments where you’re completely here and times where you feel lost or detached. Making this song with Jake felt therapeutic in a way. We could hear him addressing his current mental state and some of the moments that lead him here. It wasn’t what we expected to make that day, but in the best way possible.”

“It’s sort of a self-reflection of my truth. When I say I’m ‘somewhere else’ I’m really saying ‘all I really wanted to do was get here [hollywood/my dream], and now that I’m here I realize I’m still lost’. So to all the people who feel lost, it’s not just you…I’m living my dream and still searching for that somewhere else.”

Listen to Louis The Child’s “Somewhere Else” featuring BabyJake below.

The post Louis The Child search for ‘Somewhere Else’ with BabyJake appeared first on Dancing Astronaut.