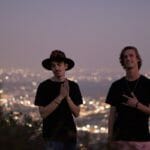 “The EP’s title is inspired by my journey in finding myself and my sound,” he told Dancing Astronaut. But the twofer goes beyond the search for one’s sonic identity and the find, to also think through the what’s next? when that identity doesn’t align with what is commercially welcomed as customary.

“When I wrote [the ideas for this EP] around two years back, I remember feeling like an outcast in the main music scenes I was trying to make a name in. Since I liked making bass music and house music and mixing both in my sets, I didn’t feel accepted in either scene,” Luhv reflected. “My sets were too experimental for most of the main clubs in LA, but I stayed true to my sound, which led me to find a home in the underground.”

The Soul Trip is, in many ways, an answer to that what’s next? An embodiment of Luhv’s conviction to continue making the music that aligns with his idiosyncratic vision, the highly textured EP, he says, is “the result of staying true to [his] own sound, even if it took people longer to catch on to the wave.”

That wave breaks with heady live instrumentation, laced with Luhv’s own vocals and electric sensibilities that span The Soul Trip‘s two tracklistings, “Drift Away” and “Lost in your Eyes.” In an interview with Dancing Astronaut, the emergent tastemaker, who might be familiar to some given his past stints at Burning Man, The Midway, Wisdom.LA, and other Southern California events, detailed the fine points of his first EP. Find both The Soul Trip and the Q&A below.

You just released your debut EP, The Soul Trip. I’m immediately interested in the title, which recalls that of your October single, “Soultrippin.” Can you delve into your title choice for this EP and the conceptual motivations behind it?

Luhv: “The EP’s title is inspired by my journey in finding myself and my sound. When I wrote these ideas around two years back, I remember feeling like an outcast in the main music scenes I was trying to make a name in. Since I liked making bass music and house music and mixing both in my sets, I didn’t feel accepted in either scene. My sets were too experimental for most of the main clubs in LA, but I stayed true to my sound, which led me to find a home in the underground.

Whether it was Santa Barbara Mountain parties, Wisdome.LA, Sayers Club, or even Burning Man, my favorite shows were never the most packed, but instead filled with all the right people who understood the vision. It’s about finding your self and being okay with being different. So many artists today start out creating from an authentic place and end up conforming to get on a label or to fit into a crowd. This EP is the result of staying true to my own sound, even if it took people longer to catch on to the wave.”

Sonically, how does The Soul Trip fit into your catalog; how does the EP expand on what you’ve done and what differences does it embody?

Luhv: “The Soul Trip embodies the duality of live instrumentation and vocals with a very electric groove. I wanted the songs to have a live feel but also feature fresh sound design. I had experimented with this sound on some of my previous releases, such as my ‘Hands Tied Down’ remix with Friz and ‘Evolve’ with Traveler. These two ended up being some of my favorite tunes to play out. I wanted to build off that energy but share a more vulnerable side of my sound featuring my own vocals this time.”

Now that we’ve contextualized the project some, I want to get into the creative process behind the EP. What can you tell listeners about your approach when producing The Soul Trip?

Luhv: “All the ideas for this EP were made in a night. I remember Friz laying down the drums and I recorded the vocals through a voice memo on my phone. All three times we stayed up all night after getting back from shows and would wake up in the morning to a fully organized track! The mixdowns for the tracks took a week or two, but the structure and the ideas were all finished in a night on separate occasions after leaving shows in LA.

I remember getting home and honestly feeling really disappointed in hearing the same tracks being played out over and over again. These ideas came together by getting back from the club and deciding to make the tracks we wish we heard when out. I also loved the idea of mixing live instruments with an electronic sound, and after David Marcus (guitar player on Drift Away) played some funky guitar over some four-on-the-floor kicks, I knew the single missing piece was some flute. After throwing in a take REALSSM did on another song, the sauce was complete and the drop came together effortlessly after that.”

How did you cross paths with the EP’s two collaborators, REALSSM and Friz?

Luhv: “Friz and I met at Icon Collective initially and after we graduated, we decided to move into a spot in the marina together. We didn’t even work on music at first; we just bonded over our love for house music, live events, and mindfulness. We both loved to curate experiences where people could let loose and be themselves and maybe make some new friends in the process. We lived together for about two years and in that time, we hosted countless shows throughout LA. We started getting sought out to play all across SoCal, including shows in San Diego and Santa Barbara. After coming together to release our remix of ‘Hands Tied Down’ by Zuma, we realized we were on to something special. After years of events together, we found the perfect combination of our sounds featuring Friz’s hard hitting basslines and house drums and my unique songwriting and sound design.

I met Sergio (REALSSM) at a session at an old studio I was renting with my friends Lederrick, Barely Great, and Sincewhen. The studio was a hotspot for underground artists and one night, Sergio came in with a very talented pianist named Mahesh. That night, I listened as they jammed over my friends beats from 10:00 p.m. all the way to 6:00 a.m. I remember losing complete track of time and feeling lost in their raw musical talent, but surprisingly, they were so humble and genuine. Later, I found out that REALSSM was the Sexy Saxman (one of the original memes on YouTube). When I first saw that video, I was in high school at the time and I remember thinking, ‘wow, this guy’s a badass!’

That night was the beginning to a beautiful friendship that has led to some of my favorite releases to date! Sergio has made surprise appearances in my sets and even if he didn’t come play, he would always come to my shows to support. To this day, he is one of my favorite people to work with and you can expect a lot more from the two of us!”

I hear a little bit of a Baths meets Shlomo influence in your music. Who are some of your musical influences and how do these influences color what we hear on the EP?

Luhv: “I appreciate the comparison. It’s funny you say that because when I first moved to LA, my roommate Barely Great would always play ‘Bad Vibes’ by Shlohmo, and I remember driving to SB to play one of the mountain parties that inspired this EP, bumping Shlohmo’s album The End the whole way up.

I definitely get a lot inspiration from his sound design. For this EP, however, I found a lot of inspiration in what I was DJing in my house sets. Artists like Kyle Watson, Skrillex,  Kaytranada, Ross from Friends, Disclosure, Taiki Nulight, and even fellow Icon grads Boiz House. All of those artists make really different music that goes off live but provides unique sound design and grooves.

Recently, I’ve been listening to a lot of IMANU and GLXY, and you’ll hear the influence in my next EP Breaks In Paradise 2. But typically, I’d say I listen to all of different types of music. I think it’s important to pull inspiration from all genres and time periods. To hear more of what Ive been listening to you can check out my playlist ‘HEARTBEATS’ on my Spotify!”