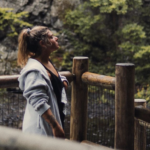 There’s an explicit reason why “Like a Nightmare” is labeled as “Luma and Blanke” rather than “Blanke featuring Luma.” Falling directly in line with Dancing Astronaut‘s ongoing Supernovas series, which continues to shine a light on dance music’s singer-songwriters, who have historically not received the same accreditation as producers despite their commensurate contributions, “Like a Nightmare” foregrounds the singer-songwriter, with Luma’s name appearing first in the line of credits.

“Like a Nightmare” is the first offspring from their week-long studio session, realized after Luma and Blanke met in Nashville in 2019. Wanting to be a part of the record without wanting to divert even a drop of emphasis from Luma, Blanke made the commendable decision to be listed after Luma because—as he so flawlessly put it—”in this genre, the top-line makes the record [and] most of our careers would not exist without these amazing vocals.”

Title aesthetics aside, “Like a Nightmare” is about as balanced of a vocalist-producer collaboration as sonically possible, with Luma going full throttle on the vocal front and Blanke supporting her with a framework of his repeatedly magnetic flair of melodic bass. Blanke says that although this is the first time that he’s appeared second to the vocalist in credit sequence, it certainly won’t be the last, and he hopes that more of his dance music colleagues can follow suit to help stress just how invaluable the songwriting part of a production can truly be.

The post Luma and Blanke epitomize the vocalist-producer dynamic on ‘Like a Nightmare’ appeared first on Dancing Astronaut.