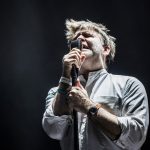 Delving into the atmosphere of 90s sitcoms, LCD Soundsystem will be portrayed by Eric Warheim, Macaulay Culkin, Christine Ko, Jon Daly, Luenell, and more for a new holiday special, All My Friends. The feature arrived on Prime Video and Amazon Music’s Twitch channel on December 22, seeing the actors portraying members of the legendary electronic band ahead of a concert special performed by LCD Soundsystem themselves.

The special, named after LCD’s 2007 hit single “All My Friends,” teases all the actors and their various roles set to an instrumental version of the track. Eric Wareheim directed the special, and is set to star as the group’s leader, James Murphy. Macaulay Culkin will be portraying drummer Pat Mahoney, while Christine Ko plays keyboardist Nancy Whang, Cory Loykasek as guitarist Al Doyle, Jon Daly as bass player Tyler Pope, Tony Cavalero as synth player Nick Millisher, Aparna Nanchelea as synth player Abby Echiverri, Rex Lee as band manager Brian Graf, and Luenell as their tour manager. Korey Rickey, meanwhile, we be portrayed by a puppet. In a statement about the upcoming faux-sitcom, James Murphy said,

“I am similarly stunned that someone let us do this. At least we finally get to use our Korey puppet.”

Wareheim said of the event,

“I can’t believe Amazon Music is letting us do this. I’ve already conquered film, James has conqured music, but we have yet to conquer the sitcom – the highest form of art. We’ve been working on this project for 15 years, and for this show we’re unveiling a uniquely emotional perspective of the sitcom universe for the holidays – provided by one of the greatest bands of all time and my dear friends, LCD Soundsytem.”

LCD Soundsystem was recently in the midst of a 20-date residency at Brooklyn Steel, with plans to wrap up on December 21. However, do to the ongoing spread of the Omnicron variant, the final few shows of the residency were canceled.