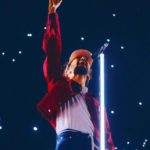 Acclaimed producer and Good Faith author, Madeon has resurfaced with the release of new single “beside you” by keshi. Madeon’s 2021 has already seen the artist headline experimental music and arts festival wwFest: VALORANT, as well as announce the return of Good Faith Live as a headline performance at this year’s Imagine Music Festival. Now, he’s lending his production skills to hip-hop artist keshi’s newest release.

The infectious, trap-influenced beat on “beside you” pairs artfully with gorgeous, emotive vocals from keshi. The intro, packed with lofi inspirations, showcases elements of Madeon’s electronic music prowess, before giving way to a more upbeat feel with bright pads and plucks complementing tight-knit drums. Madeon and keshi’s unique sounds intertwine superbly on “beside you,” showcasing the French visionary’s second-to-none production chops at their finest.