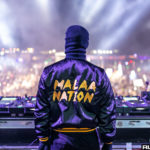 “Praise” is precisely what Malaa can be expected to elicit from Tchami and the rest of the Confession camp. The masked maven continues his 2021 tradition of tying his name to others’ originals with the drama-dressed spin, which trails his March recasting of Petit Biscuit and Diplo‘s “Pick Your Battles” and his February edit of Alison Wonderland and Valentino Khan‘s “Anything.” Doubling as Malaa’s third re-inventive endeavor of the calendar year and the Year Zero remix LP’s first peek of sound, Malaa’s “Praise” take finds him flexing his crepuscular house muscle, dousing the original in his idiosyncratic signature, and setting a high bar for the Year Zero conversions yet to come along the way.

The companion to Year Zero, which was crowned Dancing Astronaut‘s 2020 Album of the Year, will land on June 25.