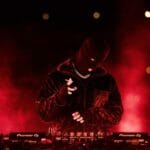 No one should even attempt to pinpoint a lone crowning moment from DJ Snake and Malaa‘s sophomore Secret Room stream, but the masked Parisian had everyone paying full attention when he tweeted out “ID ID ID ID ID ID” right as the the back-to-back set crossed its 22-minute mark. Instantly detected as an impending Malaa conversion of Petit Biscuit and Diplo’s Parachute linkup, “Pick Your Battles,” that formally known ID has now been officially realized after only a short-lived waiting period.

Succeeding a first run of Parachute reworks that tapped into the creativity of Jai Wolf, Big Gigantic, and Jerro, Malaa was called up to deposit his impenetrable French house command on an already sublime cut of electronic music, and he stayed on par with his first spin of the year, “Anything.” Holding onto a sliver of the source’s chilling vocals, Malaa retains Petit Biscuit and Diplo’s passional spirit, catalyzing a measure of foreboding bass house that had both him and his Secret Room counterpart unable to stand in place behind the decks.

The post Malaa serves a dark recast of Petit Biscuit and Diplo’s ‘Pick Your Battles’ appeared first on Dancing Astronaut.