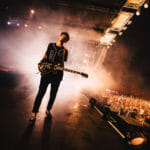 “The entire ‘Parachute’ album remixed by artists and friends that I love. Every remix is different from one another, to show how rich the electronic music scene is. I want to thank everyone for having brought your touch to make this album!”

The remix LP highlights genres such as indie-alternative, nu-disco, progressive, tropical house, bass house, synth-wave, and downtempo. Each rework reflects on the 21-year old’s eclectic approach of acoustic and atmospheric elements forged with the signature styles of each respective remixer. Petit Biscuit recently offered some perspective on his very own “Pick Your Battles” remix contest in a special Q&A with Dancing Astronaut. Stream the Parachute remixes below.