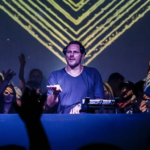 After a career spanning more than a decade and a half, Mark Knight has finally recorded and released his debut album Untold Business. Throughout the record’s 13 tracks, Knight cleverly crafts listener-ready earworms without ever losing his commitment to the dance floor. Although Untold Business‘s main focus is clearly house, Knight dives deep into classic soul and disco often to pay homage to the origins of modern dance music. The LP has the immediate feel of a timeless record, one that could’ve rocked the party 40 years ago—or 40 years later.

Untold Business features a whopping 21 featured artists, an impressive smattering of talent that only Knight could bring together. Across the record, the cast of vocalists focuses on uplifting motifs of love and positivity, themes that have always been prevalent throughout Knight’s catalog. Of course, Untold Business is released via Toolroom Records, the label that Knight and his brother founded together in 2003. To celebrate the momentous release, Dancing Astronaut caught up with Mark Knight for a track-by-track breakdown of his debut LP, touching on the inspirations behind the record and his numerous collaborations.

Mark Knight: “I wanted to write a song of positivity and hope for the future as we emerge from this difficult time. There was so much work went into this huge production and I worked with some incredible musicians including a full string section, the 14-piece London Community Gospel Choir and the amazing Beverley Knight on lead vocals. It was a brilliant experience and one that I’ll never forget.”

Mark Knight: “I was massively inspired by Jam & Lewis, who produced epic sounding soul music, and wanted to write something that sounded just as fat. I love their production on Michael and Janet Jackson’s single ‘Scream’ and I wanted to create something that had a bit of that vibe, but rooted in dance music at the same time. I’d previously worked with Chenai on ‘Tonight’ and she is such a wonderful singer. So she initially wrote a song and I changed the hook from what was a verse to the chorus and the result is that lovely and warm R&B house sound.”

Mark Knight: “I love working with Shingai, she has a completely unique personality and talent. Her performance on ‘Feel The Pressure’ completely embodied the spirit of the song, it was so good that it actually put me under a fair bit of pressure to get it right. I had to seriously up my game working with someone so individual and iconic and it turned out to be a pretty fitting song title in the end!”

“Love Is All We’re Living For” with Michael Gray (feat. Gia)

Mark Knight: “There’s a record by Selace (aka Felix from Basement Jaxx) called ‘So Hooked On Your Lovin’ of which no one knew the vocalist, and I was desperate to track her down. So called Felix and she was actually a girl called Gia who worked at the studio café and he just invited her to come and sing! I managed to find her on Instagram and asked if she wanted to work on the record. I had a track idea inspired by an old Evelyn Champagne King song, Andreya Triana wrote the topline, and Gia came and belted out a brilliant performance in one take!”

“You Saw Me” (feat. Damon Trueitt)

Mark Knight: “Do you recognise that voice? It’s Damon Truitt, who sang on the garage anthem ‘Refuse (What You Want)’ on Nice N Ripe in the ’90s. They were one of the first labels that had a really distinctive sound that you would instantly recognize. So, on ‘You Saw Me,’ I really wanted to pay homage to that popular classic sound. Unfortunately, we couldn’t record this in person as Damon is based in DC, but we bounced ideas back and forth remotely and it came out really great.”

Mark Knight: “I tried working with Alex previously some years back on a topline for ‘Yebisah‘ after receiving offers from major labels. She wrote a song called “White Flag,” which sadly didn’t work quite right with ‘Yebisah’ but was eventually released as a Kings Of Tomorrow record. So finally, we got to work together, and I wanted to create something lovely that reflected both our passions for that soulful Afro-house sound.”

Mark Knight: “This is everything I loved in the ’80s reimagined through house music. Clem impressively wrote the topline on the spot! I was just flicking through sample packs to do a remix last year and discovered Jafunk, who had a load of sample packs, so I looked him up and asked him if he wanted to work on the album. He’s a brilliant keyboard player and knows all this stuff from the ’80s—he fit my vision like a glove!”

Mark Knight: “This is actually my favourite record on the entire album. It just feels really original, and it’s not trying too hard to be one thing or another. It just works. The topline was actually written as a Black Zeus record by Simon Lord who’s Simian Mobile Disco. It didn’t fit on that album but the lyrical content was amazing so I asked Gene to re-vocal it and slow it down.”

Mark Knight: “Mike City has released albums on BBE and has written for Faith Evans, Mariah Carey, among others, and he’s also a brilliant singer in his own right. I’m a huge fan! This track was actually released on BBE last year, but it was such a perfect fit for my album that I licensed it back.”

“Pass It Up” with D.Ramirez (feat. Robert Owen)

Mark Knight: “I really dabbled in a bit of nostalgia on this one, and it really sounds like it was made in 1987 with everything recorded analogue. Marshall Jefferson and Ten City have been such an inspirational act for me, and I wanted to make something in a similar vein, using those production values. I think we hit the nail on the head with this one and a vocal from the legendary Robert Owens is really the icing on the cake!”

Mark Knight: “Rene and myself have worked on a few things together now and it’s always a pleasure to work with him; we make a good team. The music is centred around that familiar classic bassline and sax riff from Brick’s ‘Living From Your Mind’, coupled with a completely new uplifting vocal from Tasty—the whole track is so catchy!”

Mark Knight: “This track pretty much inspired The Who album concept. I released it in 2020 before the album project had really started to come together. I wanted to create a joyful soulful house sound, like that which was popular in the ’90s, where vocals were the central heartbeat of a record and the vibe was pure and uplifting. I sought to combine the feel-good vibe of those classic records with production values of the present and the success just blew me away!”

Mark Knight: “This was inspired by the filtered house sound of the early 2000’s which producers like Kid Creme used to make. Chenai gave a fantastic soulful vocal performance and Mr V delivered an authentic, New York-style spoken word, and the two really complement each other.”