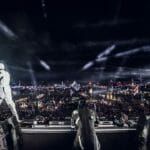 The list of why Martin Garrix’s appearance at Ultra 2016 is tabbed as iconic goes on and on, but there’s a sole takeaway that’s remained more pertinent than ever throughout 2021: the birth of AREA21. Garrix and Maejor’s extraterrestrial alias had kept to itself for nearly two years following its last musical transmission, but in the fall of 2020, the former disclosed that the reasoning behind the duo’s silence wasn’t in vein, it was because a full-length album had been in the making. Six previews later and the time has ultimately come to retire one of Dancing Astronaut‘s most-anticipated projects of 2021, with AREA21 making its final descent toward Earth to deliver Greatest Hits Vol. 1 via STMPD RCRDS and Disney’s Hollywood Records.

When Martin Garrix clued everyone in that AREA21’s newest output wouldn’t necessarily fall in line with its electronic-angled nature of the past—from originals like “Spaceships” or “Glad You Came“—the answer as to what the two actually had in store was truly one large question mark. But the moment “La La La” entered orbit this past April to light the torch on the album’s rollout timetable, any skepticism as to whether or not Garrix and Maejor would hold the same footing of effortless symbiosis as before was immediately crushed. With every passing month and subsequent tracklist boost—paired with its own mesmerizing animation counterpart that was developed by Titmouse—Greatest Hits Vol. 1‘s bond of imaginative promise only tightened, with the two taking the stage for the first time ever at EDC Las Vegas—playing out “Own The Night” and their then-unreleased album opener—and pushing the sheer excitement for what AREA21 had looming through the stratosphere.

“La La La,” “Pogo,” “Mona Lisa,” “Lovin’ Every Minute,” “Followers,” and “Own the Night” embraced the album’s latter half on its delivery day, with Garrix and Maejor fittingly summing their freshman co-venture to 12 total tracks on—of course—November 12. Greatest Hits Vol. 1‘s most desired number could’ve only acted as the piece that would unlatch the ingenuity floodgates that would follow as “21”—introduced at Spring Awakening Music Festival—soundly personifies the album’s unrestricted, carefree directive and feels like its most defining cut. Taking both the singles and fresh additions into consideration, Garrix and Maejor wholeheartedly leave no genre stone unturned on their full-blown reunion, trending back towards the hip-hop tone that they left off on in 2019 with “No Angel” and “Human,” gallantly blowing the stylistic roof off on happy-go-lucky productions like “All I Need,” and shifting gears to take a more wistful, heavyhearted approach on “Time Machine.” The album’s curtain closer undoubtedly demands its own moment of praise, with AREA21’s more than aptly named conclusion “Going Home” routing its space cruiser toward its destination as they commission the angelic vocals of an actual children’s choir as Garrix and Maejor pay ode to their alias’ newborn glow from its earliest days—expressive of Porter Robinson’s “Divinity”— erupting in a grand finale as the latter thanks those who accompanied them on this joyride. Both halves of AREA21 shared their feelings surrounding the five-year journey to Greatest Hits Vol. 1 and their decision to pursue an exhaustive project, stating,

“It was really important for us to have a full body of work because there’s so much stylistic range on the album. I feel like if we had the pressure to compress it into something smaller, it wouldn’t have worked.” – Maejor

“I’ve never released this many songs before at the same time, so I’m nervous about it. But that nervousness gets overshadowed by excitement, adrenaline and passion. This project means so much to us both musically and conceptually. I’ve had some of the best moments of my life working on these songs and we can’t wait to finally share them with the world.” – Martin Garrix

Only time will tell if Greatest Hits Vol. 1 evolves into a long-winded project chain between Martin Garrix and Maejor’s shared alter-ego, but if the originality shown through their introductory installment is any indication, AREA21’s future space odysseys have no end in sight.

The post Martin Garrix and Maejor prove to be the most balanced duo on AREA21’s first full-length ride, ‘Greatest Hits Vol. 1’ appeared first on Dancing Astronaut.