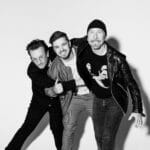 It’s truly Martin Garrix season. In between his looming AREA21 album and collaborative teasers alongside both Kygo and Zedd, the STMPD RCRDS boss has another sliver of new music to present to the masses. When Garrix rang in his 25th birthday with his EURO 2020 anthem alongside Bono and The Edge, he had revealed in an interview that “We Are The People” was not the lone musical product of his studio sessions with U2. Similarly to Alesso’s Blade Runner: Black Lotus soundtrack inclusion, Garrix can now add scoring a movie onto his lengthy resume, appearing on the credits for U2’s new single from the upcoming Sing 2 soundtrack.

Garrix revealed that he co-produced, mixed, and mastered the band’s Sing 2 contribution “Your Song Saved My Life,” which was shared ahead of the movie’s December 22 release. “Your Song Saved My Life” is a stark contrast from Garrix and U2’s stadium-ready EURO 2020 anthem, but rightfully so. Trending towards a more melancholic feel, the Sing 2 inclusion has Garrix’s production touch written all over it and hopefully isn’t the last we see of the proven dynamic between him and the legendary rock band.

The post Martin Garrix and U2 reconvene for contribution to ‘Sing 2’ soundtrack appeared first on Dancing Astronaut.

Tagged as martin garrix, music, U2.