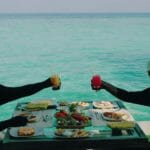 Martin Garrix and Maejor are formally attaching AREA21 to a major label in tandem with STMPD RCRDS, with the announcement that their alias has now joined Disney Music Group’s Hollywood Records. The news, confirmed in a press release from STMPD RCRDS, comes together with an updated timetable that the duo’s presently unnamed debut album will be moving back from its original May slot to a later date this fall.

Although the album’s flight path may have taken a slight detour, AREA21 have already ensured that the record will be worth the wait with the delivery of “La La La” at the onset of April as the first of 12 tracks set to appear across the LP. In collaboration with Titmouse, an Emmy Award-winning animation outfit that’s produced for both Dua Lipa and Run the Jewels, both Garrix and Maejor linked “La La La” with an originative visual that reimagines the two as aliens setting out on a journey throughout space.

If having Disney by their side is even the slightest bit of an indication towards what AREA21 are scheming up in the comings months, the album’s inclusion on Dancing Astronaut‘s most-anticipated projects of 2021 shouldn’t have an ounce of doubt.