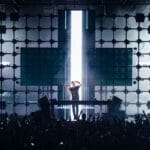 Five full years of STMPD RCRDS have officially come and gone following the label’s foundation through Martin Garrix, John Martin, and Michel Zitron‘s “Now That I’ve Found You” at the top of March in 2016. Now one of the most-decorated electronic imprints, STMPD RCRDS is extending its half-decade festivities with a celebratory anniversary installment of STMPD RCRDS Radio headed by none other than the label helmsman himself.

While cooped up at his Amsterdam home throughout the pandemic this past year, Martin Garrix decided that a day-in-the-life walkthrough beginning with a pancake cooking session for breakfast was a more than fitting commemoration of the label milestone. Garrix heads into his home gym, shows off his unique rock collection, and tours his personal studio, confirming that he’s mostly worked on AREA21‘s debut album (with its rollout to begin on April 9), along with his own music including pandemic-friendly releases like “Pressure” with Tove Lo. His tried-and-true “euphoric, festival stuff” will be released when concert activity eventually resumes, he says.

Garrix then moves locations with a convenient eight-minute drive from his house to STMPD RCRDS’ newly redesigned studios to tour the different rooms throughout his label’s headquarters, including its new 51-speaker Dolby Atmos Mix Stage. In the episode’s final moments, Garrix shares his first-ever STMPD RCRDS memory—a debut of the “Now That I’ve Found You” instrumental, presented during his 2015 Sziget Festival set. The single went on to complete his Ultra performance in its final form that following March.

Enjoy 15 minutes of Martin Garrix’s home and studio tour below.