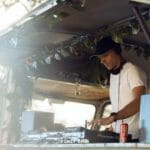 After bestowing his two prior album singles, “Another Dawn” and “5am,” France’s own Massane has brought forth his final album single “Wild,” an outing made in tandem with alternative UK artist Colouring.

Only a year out from his initial entry to the scene, Massane has managed to accrue an EP trilogy, multiple remixes, and three album singles, all of which precede his forthcoming freshman LP Almost Dawn, due via This Never Happened (TNH) on June 4. The melodic house maestro has quickly become a fan favorite, appearing frequently alongside This Never Happened mastermind Lane 8. His latest, “Wild,” encapsulates all that fans would expect from a TNH mainstay, including a subtle yet ornate house lead-in, rich vocals, and pristine production. “Wild” occupies the sentiment of desperately yearning to be elsewhere while feeling utterly trapped where one is with precision.

Though Massane may still be climbing the ladder he began ascending last year, the producer is assuredly on his way to the top. Stream the latest album single and introductory song from the Almost Dawn tracklist below.

The post Massane, Colouring band together for ‘Wild’ via This Never Happened appeared first on Dancing Astronaut.

Tagged as Another Dawn, Lane 8, massane, music, this never happened.