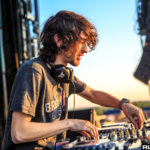 As one of dance music’s key tastemakers, when Mat Zo steps up with a remix, it tends to be well worth a listen, and this is certainly true of Zo’s latest project, an electrifying remix of Ferry Corsten’s “Rock Your Body Rock.” Over the course of the past year, Zo has been spinning certified heat on Anjunabeats, all while curating one of Dancing Astronaut’s Top Electronic Albums of 2020, Illusion of Depth.

Introducing the remix with some of Zo’s signature sonic hallmarks, “Rock Your Body Rock” bubbles over to make for one of the more lively weapons in Zo’s arsenal. Using Ferry Corsten‘s vocals from the 2011 bloghouse-era original, Mat Zo adds an expansive atmosphere, diving into a new world with a funky piano progression and a mountainous build-up.

After channeling an indie-rock expression with his latest release of the live version of his track “Problems” featuring Olan, the range Mat Zo exemplifies from release to release is nothing short of impressive. Stream Mat Zo’s “Rock Your Body Rock” remix below.