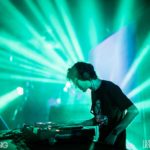 Mat Zo has shared a live rendition of his track “Problems” featuring Olan taken from his third studio album, Illusion of Depth, which was named one of Dancing Astronaut‘s best of 2020.

The “lockdown” version of this staggering acid-club original work undulates into a refreshing blend of indie-rock and new wave tropes. The featured live session showcases Olan’s haunting vocals and eccentric guitar talents juxtaposed against Mat Zo’s re-imagined live drum grooves that draw on the familiar sounds of the psychedelia or acid punk genre of the late 1960’s.

Atlanta-native singer and songwriter, Olan, performed an intricate role on the Grammy-nominated producer’s nearly feature-free album by appearing on such singles as “Colours,” “Problems,” and “Paralysis.” Recorded in lockdown, Mat Zo and Olan prove to be a formidable pair, even when separated by social distancing measures. Watch the new live version of “Problems,” which you watch below.