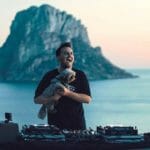 AREA21 may not be the only full-length project that STMPD RCRDS will be standing behind in 2021. Matt Nash unsuspectingly joined the conversation at the backend of April, all but confirming on Instagram that his debut LP was finalized. He’s now consummating a trilogy of releases in just the first half of the year—which may or may not wind up on the album’s eventual tracklist— with “Ready Or Not” alongside Nikki Ambers.

Matt Nash seems to cleverly foster his progression deep into A-list pace on STMPD RCRDS through every single round on Martin Garrix’s imprint. Setting out to ideate a polished summer crossover, Nash brought in Nikki Ambers to match his seasoned brand of club-graded house with a set of beaming lyrical colors, tied to a Tron-like visual counterpart and artwork that triumphantly translates the track’s glory.

The post Matt Nash returns to STMPD RCRDS with Nikki Ambers-backed ‘Ready Or Not,’ hints at debut LP appeared first on Dancing Astronaut.