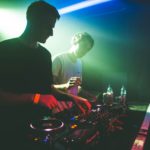 From Punctual‘s studio comes a seductive floor-filler with Danish singer-songwriter Nabiha, “The Step.” The single, which samples the Missy Elliott classic “I’m Really Hot,” is a raw, club-ready house cut that combines catchy vocals with punchy basslines and breakdowns. It follows the pair’s 2020 hit single “I Don’t Wanna Know.”

Comprising Will Lansley and John Morgan, Punctual pierced the scene in 2016 with their debut single “Eva,” released via Becky Tong’s Juicebox label. The dynamic duo has since continued to release music under the Punctual project while diversifying its catalog with production credits on Raye’s “Regardless” and on Steve Aoki’s “Imagine” with Frank Walker and AJ Mitchell.

“The Step,” released via Interscope Records, is destined to become a post-lockdown club staple. Dancing Astronaut caught up with Lansley and Morgan of Punctual to chat about their recent success, how they met, the dance music scene in the UK and Europe, and of course, their new song with Nabiha. Find “The Step” and the interview below.

How were you introduced to dance music, and what prompted you to form a duo?

Punctual: :Our first real introduction to dance music was drum ‘n’ bass. Albums like Pendulum‘s ‘Hold Your Color,’ Sub Focus‘s Sub Focus, and Chase & Status‘ ‘More Than A Lot’ inspired us both to start making that kind of music.

We both grew up together in a small town and were actually introduced by a friend who we both separately made music with. The first time we ever met each other was in a bedroom, producing dance music!”

What is unique about the club scene in the UK as opposed to the rest of Europe?

Punctual: “Obviously right now, clubbing feels like a bit of a distant memory, but we’re lucky in the UK, especially in London, to have such a thriving club scene and have some of the best clubs in the world on our doorstep. It is certainly different from the rest of Europe in terms of what you can get away with playing though.

In our experience, when we’ve played at European festivals, what people react well to leans slightly more toward the EDM side of things. People are just there to have a good time and generally go wild to high-energy music! The UK has a slightly more refined taste; it’s more about building an atmosphere across your set. That’s a bit of a generalization, obviously, but generally speaking that’s how we approach our sets depending on where we play.”

Who are some of your major influences inside and outside of dance music and how have they impacted you musically and individually?

Punctual: “It sounds cliché, but we’re both massive fans of music generally. We tend to not listen to dance music in our spare time which I think helps with creativity when we get back in the studio. It’s difficult to single out one or two artists who shape our music in that respect because it’s a whole mirage of styles and sounds that will impact it, although we both absolutely love R&B artists like H.E.R. and Lucky Daye, and when we’re writing with vocalists/topliners, it’s often the more R&B melodies that get us super excited about a track.”

Where do you draw inspiration from when it comes to production?

Punctual: “From all over the place really! Right now, we’re inspired by a whole range of artists from the likes of Riton to RÜFÜS DU SOL to Bassment Jaxx!”

What can fans expect from ‘Punctual’ in the next coming months?

Punctual: “We’ve obviously got our new single ‘The Step’ and we’re currently working on a little club VIP mix of it to come in a few months’ time! Otherwise, we’ve got a bunch of singles, collaborations, and remixes that are set to be released over 2021 that we’re super excited about. We’re also going to continue releasing DJ mixes on our ‘Right On Time’ mix series where we play our favorite records that month.”

Where would you like to see Punctual five years from now?

Punctual: “We’d absolutely love to release an album one day. It’d be amazing to do a longer project where we get to be super experimental and push the boundaries across a whole collection of tracks. Generally, still being able to do what we do for a living in five years’ time will be a blessing because not everyone is able to do that, and we feel extremely lucky that we get to do what we love every day.”

Outside of music, what do you enjoy doing in your free time? Have you picked up any hobbies throughout the pandemic?

Punctual: “We’re both into all sorts of things outside music and think it’s important to step away from music sometimes and refresh your brain. John is a keen football (soccer) player and an avid Arsenal FC fan. He is also a big chess player and plays every day! I [Will] am big into horticulture, and am currently very proud of the new succulents I’m growing.”