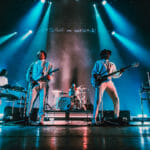 As the 10-year anniversary of The English Riviera approaches, Metronomy are properly commemorating the upcoming milestone with an MGMT remix of “The Look.” Metronomy’s most-streamed song to date, with 137,205,725 Spotify streams at the time of this writing, “The Look” was released as The English Riviera‘s second pre-album single on March 11, 2011.

MGMT repower the Metronomy fan favorite, extending its runtime and doubling down on instrumentals to generate a quirky, ruminative companion to the classic. The rework, which preserves the spryness of the English group’s original while adding distinctive MGMT twists to its aura, is the first of several celebratory actions that Metronomy will take to honor an album widely regarded as their most significant.

On April 30, the outfit will reissue The English Riviera via Because Music. The anniversary edition of the LP will feature six previously unreleased songs, bringing the tracklist to a total of 17 inclusions. Turntablists can find the re-release in limited-edition and numbered heavyweight (180g) vinyl formats.

Metronomy have also announced their intent to honor The English Riviera with a 2022 tour spanning the United Kingdom and Ireland. A complete list of tour dates and additional information about the live initiative can be found here.

The post Metronomy celebrate 10 years of ‘The Look’ with MGMT remix appeared first on Dancing Astronaut.

Tagged as Metronomy, mgmt, music, The English Riviera, the look.