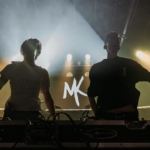 Considering how turbulent the first weeks of the new year have expectedly come and gone, a surprise revision from Midnight Kids could not have been more essential. A little over a month removed from the reignition of their release docket, executed with a similarly abrupt delivery of their take on Zedd and Griff‘s “Inside Out,” Midnight Kids are doubling down on this pattern to adapt Winnetka Bowling League’s “Congratulations.”

Dylan Jagger Lee and Kyle Girard are taking a step into slightly unmapped terrain (in the context of their catalog) for a reimagining that still plainly holds a candle to their prior string of superlative track alterations. Preserving the alternative spice from Winnetka Bowling League’s original, Midnight Kids give “Congratulations” an indie-electronic lift, refining its production with a gleaming lure that reprises why each of the pairing’s sonic moves are as touted as they are.