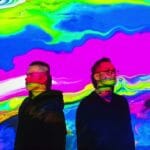 In late 2020, Morilla and Oliver of Midnight Pool Party took a weekend trip away to buckle down and churn out some new tunes. A byproduct of their productive holiday, the Aussie duo’s latest single, “POTENTIAL,” has landed. The funky dance offering arrives on the heels of “CREAM” and “NO NAMES,” both of which were born during the same weekend. Midnight Pool Party expressed how their weekend away resulted in “some FUN songs” in a recent statement, explaining,

“‘POTENTIAL’ is about ‘shooting your shot; with someone and just taking a risk, but it’s also about having fun, being free and having the confidence to be someone’s fantasy.”

The post Midnight Pool Party live up to their ‘POTENTIAL’ on third single of 2021 appeared first on Dancing Astronaut.