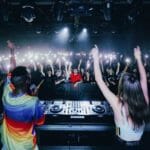 Our Breakout Artist of 2020 has teamed up with one of our Artists to Watch in 2022. That’s reason enough for your first listen, and the music itself, even more to keep coming back.

Moore Kismet and Pauline Herr unite on “Parallel Heartbreak,” the latest single on Kismet’s highly-anticipated debut album, UNIVERSE. The second ever collaboration between Kismet and Herr follows 2019’s “You Should Run.” Kismet’s production shines on their latest sonic union with equally compelling vocals by Herr in a track that ensures both get 2022 started with a bang.

Moore Kismet’s debut album, UNIVERSE, is set for release later in 2022 and has already seen standout singles like “Call of the Unicorn” with Tasha Baxter, “Rumor,” “Vendetta for Cupid,” and “Autonomy” released in the lead up to the album’s full release. The surprise release of “Parallel Heartbreak” as a single only continues to raise expectations for the budding superstar’s first full body of work, one they will surely exceed based on the preceding singles. Newly minted Artist to Watch in 2022 Pauline Herr also sets the stage for an exciting year led by a welcomed sophomore collaboration with Kismet. This follows her submission to Dancing Astronaut’s Top 100 Electronic Tracks of 2021, “care about u“, that closed out her banner 2021 release run. Herr recently played her first ever New Year’s Eve show at Countdown NYE in San Bernardino and continues to be a rising force to keep an eye on.

Listen to “Parallel Heartbreak” below.