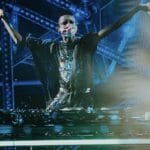 Amid their work on one of our most-anticipated albums of the year, Dancing Astronaut‘s Breakout Artist of 2020 Moore Kismet recently turned their attentions away from their debut album’s tracklistings to take on Tate McRae’s “slower” in a new remix. Picking up the pace of the original while simultaneously accelerating McRae’s vocals, Kismet brightens “slower,” rinsing it in the potential to become a future festival favorite while preserving its meaning.

Kismet’s spin on McRae’s work interrupts their consecutive slew of album singles, with three—”Autonomy,” “Vendetta For Cupid“, and “Rumor“—arriving ahead of the LP, to be released in June. With only a little more than a month to go until the project’s land date, Kismet’s “slower” remix competently tides over fans until the album’s release.