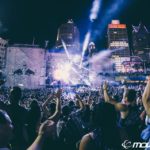 After Movement Detroit’s festival cancellation was announced in February, the festival has now returned with a micro-event that will be hosted over Memorial Day Weekend. Paxahau Presents will be throwing Micro Movement, with local Detroit performers spread through three venues around the city: TV Lounge, Magic Stick, and Spot Life.

Each venue will have an extremely limited capacity, with required masks and social distancing throughout each space. Both TV Lounge and Spot Lite are 21+, while Magic Stick Alley Deck is 18+. Additionally, there will be no cover charge for each of the venues, with a full lineup set to be announced soon.

The event will last from day until night throughout the various venues, with capacity limits also not yet announced. While attendees will be required to wear masks while inside each of the venues, it has not been said whether or not proof of a negative COVID-19 test or temperature checks will be required upon entry.