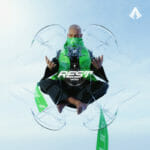 The title of Musa‘s latest production “rest” can be read as his advice to self amid a self-professed “messy breakup,” the emotional intensity of which translates to the Halcyon-distributed record in an effervescent fashion. Gracing the tracklist of the label’s Sounds Vol. 2 compilation, “rest” is a bold tangle of future-bass, dubstep, and indie-electronic that Musa calls the “complete manifestation of [his] inner voice and style of production.” Its inventive sound design is enough to beckon streamers back to the “play” button past their initial run-through of “rest,” and though Musa “only had a few words to say” on the single, it’s evident that it speaks for itself as an ear-catching example of the self-taught musician’s novel ear, as well as his penchant for playing with sounds in a way that is sometimes abstract and always original.

“’I only had a few words to say on this song lyrically, specifically because at the time of creating it I had pent-up frustrations from a messy breakup. In a flurry of emotions with no specific direction, I put all my energy into the intense musical drops of the song, while simply repeating to myself, ‘it’s all because of you,’” Musa reflected.