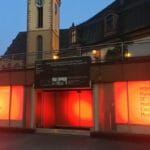 After six years of waiting patiently, Germany’s Frankfurt will finally welcome The Museum Of Modern Electronic Music, or MOMEM, on April 6, 2022. Following an extended search to find the right location for the project, the first exhibit to commence MOMEM’s opening is “Sven Väth—It’s Simple To Tell What Saved Us From Hell.” The exhibit will feature the DJ’s private archives of art, records, photographs, films, and more, curated with the help of Väth’s close friend, Tobias Rehberger.

Conceptualized by Andreas Tomalla, better known by his stage name Talla 2XLC and founder of Technoclub, the brand new museum moves forward with plans to create exhibits that will represent the history and predicted future of electronic music, while paying respects to the cultural impact dance music has given to music devotees around the world. The multi-room space will host immersive exhibits, recordings, talks, events, as well as DJ/Producer-ran workshops.

Zamna Festival Reawakens Tulum to Kick Off 2022 With 6 Nights of Dance...