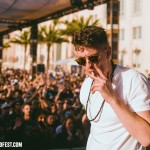 Low end veterans MUST DIE! and Skream have teamed up with Akeos to share a bass-heavy new single, “LOL OK.” The track begins with whirring synths and static-filled vocals. Building up to the first break, the track creates ragged energy amid a creative, experimental soundscape, showcasing MUST DIE! and Skream’s venerated production capabilities.

Bringing together what fans love most about MUST DIE! and Skream, from echoing blips and a thrumming bassline, the track whirs and screams past slinking buildups launching into fluttering and cascading bass. The track allows both collaborator’s skillsets shine throughout “LOL OK,” highlighting an obvious synergy between one of bass music’s oldest figureheads and one of the genre’s current leading torch carriers.

Skream recently opened up his vault and dropped a collection of unreleased demos on Bandcamp last month. “LOL OK” arrives as MUST DIE!’s second original release in 2021, and follows “SORROW TECH,” which dropped in February.