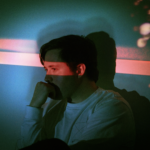 Given The Four Seasons’ doo-wop sensibilities and rock inclinations, listeners likely would not have expected Frankie Valli’s son Brando Valli to foray into dance music—much less drum ‘n’ bass—but Dancing Astronaut is sure of one thing: we’re damn glad he did. After forging a name-making campaign that culminated in five singles—the first of which (“Orisha,” July 2020) christened Valli as Snse as the remaining four gave shape to his emerging sound—Valli is further carving Snse’s niche in the electronic space with “We Need Love.”

The spry outing, made in step with Elijah Blake, is a burst of energy bottled in a three-minute and 25-second runtime. The ear-hooking new number has a freshness to it; it doesn’t sound like anything that listeners might find on a streaming platform’s “new music Friday” playlist—and that’s just part of “We Need Love’s” novelty. Take it from us: “We Need Love” is an effervescent microcosm of why you want to be watching what’s next to come out of the Snse camp.