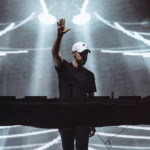 Melodic mastermind Jason Ross is at it again. Reunited with Seven Lions‘ Ophelia Records for his first extended outing since his breakthrough LP 1000 Faces, Ross is back to bless everyone’s ears with a scintillating four-song EP, Convergence.

The project is bookended by “One More Day” with Blanke and Chandler Leighton, one of Dancing Astronaut’s most sought-after IDs of 2021. The EP closer, “Wild Ones” with Nevve, was a successor that solidified Convergence‘s status as an offering to be mentioned amongst the very best at the close of the year—even before it formally released.

Beyond “One More Day” and “Wild Ones” are two sparkling new tracklistings, “Stop Blaming Love” featuring Micah Martin and “Beneath It All,” a highly anticipated effort involving Ross and Crystal Skies, featuring Dia Frampton. Crystal Skies, hot off “Like Water,” released via Lost In Dreams, and frequent Ophelia vocalist Dia Frampton, fresh off “Spark” with Blanke, complement Blanke’s melodic sound, putting on a show with their Convergence contribution.

Convergence can be streamed below.